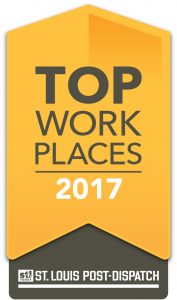 Dr. Terry Brewer is founder and President of Brewer Science, headquartered in Rolla, Missouri. Brewer Science has a unique business model, one that extends beyond product creation and development to the creation of an environment that inspires and enables the cycle of perpetuating the ability and desire to be innovative. Under Dr. Brewer’s leadership, Brewer Science has grown to be an international company with a global network of people providing superior products, support, and service.

A full list of the top midsize workplaces is available at http://graphics.stltoday.com/apps/workplaces/

About Brewer Science
Brewer Science is a global technology leader in developing and manufacturing innovative materials, and processes for the fabrication of semiconductors and microelectronic devices. With its headquarters in Rolla, Missouri, Brewer Science supports customers throughout the world with a service and distribution network in North America, Europe, and Asia. Learn more at http://www.brewerscience.com.